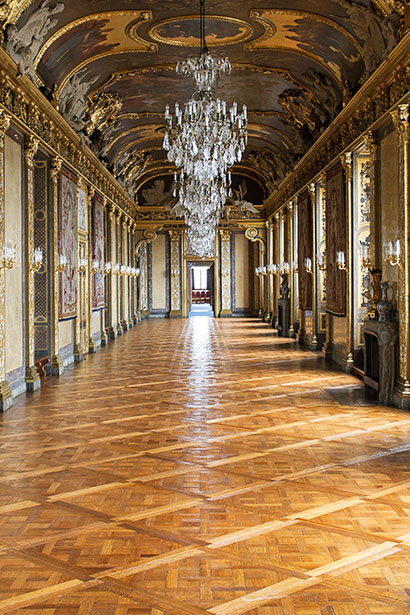 King Karl XI's Gallery is the grandest room in the palace and of the entire Swedish late Baroque period. Much of the room's décor depicts aspects from Sweden's period as a great power.

The Hall of Mirrors at Versailles was the model for the room's décor. Here, an impressive ceiling painting depicts King Karl XI's Scanian War of the 1670s. The painted and sculpted details of the ceiling were created by Jacques Foucquet and René Chauveau. This work is a tribute to King Karl XI and his consort Queen Ulrika Eleonora.

Today, The King and Queen hold their official gala dinners in the gallery in connection with state visits. Before these dinners, a long table is set for around 150 guests.

The Nobel Laureates are also invited here for dinner on the day after the grand banquet at Stockholm City Hall.

FACTS
The term Baroque translates roughly as absurd, excessive or unreasonable, and King Karl XI's magnificent gallery is the epitome of this style.