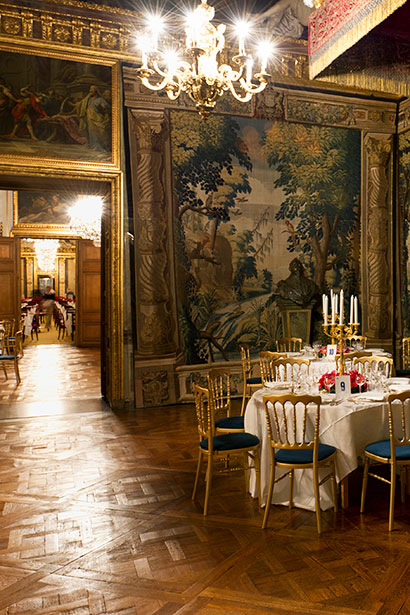 The ceiling was created by artist Jacques Foucquet and sculptor René Chauveau. The centre section depicts the lovers Mars and Venus, and the painted door lintels show scenes from the history of Alexander the Great by Jean Restout.

The canopy is Italian Renaissance embroidery, and came to Sweden with King Johan III's consort Queen Katarina Jagellonica. The landscape tapestries were woven for Queen Kristina's coronation in 1650.

Today, the Audience Chamber is used on ceremonial occasions and for suppers. A Riksdag supper is normally held after every election.

FACTS
During the 1690s, the intention was that the room should be King Karl XI's state bedchamber. His red silk velvet canopy was made in 1667. It is embroidered with gold and silver thread.