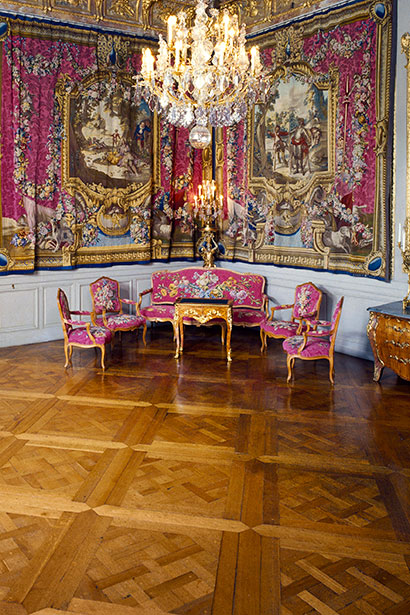 The room is named after the theme of the woven tapestries, which depict the tragicomic hero Don Quixote from Miguel de Cervantes' novel.

The tapestries and the furniture coverings were a gift to King Gustav III from the French King Louis XVI. Some of the décor and furniture are in the Rococo style.

The ceiling of the salon was painted by the French artist Guillaume-Thomas-Raphaël Taraval in 1735, and depicts Juno, Queen of Olympus, surrounded by the four winds.

Some of the chairs were made by chair-maker Jean-Baptiste Lebas in Paris in the mid-18th century.

FACTS
The salon is decorated in the 18th century Rococo style. The style is characterised by its playful, graceful, organic forms. The doors are made from oak and painted in gold.