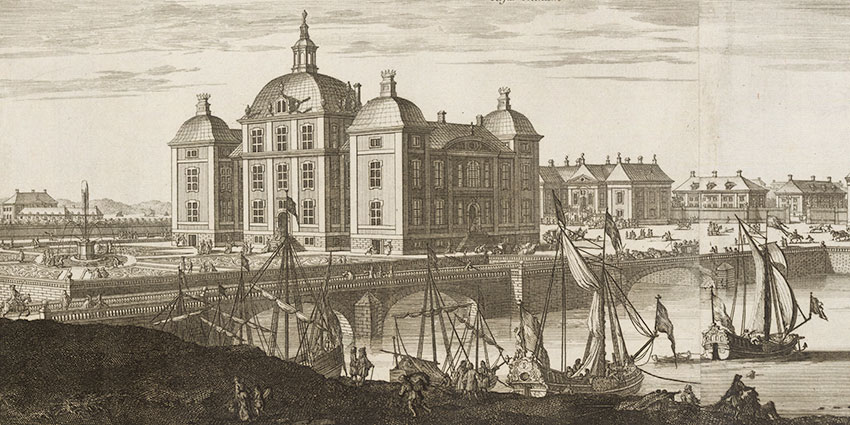 King Gustav Vasa laid the groundwork for Strömsholm Palace when he had an estate built on an island in the Kolbäck River in the 1550s. After his time, it became the summer palace of Swedish queens – from Katarina Stenbock to Sofia Magdalena. Today, there is a riding college and an animal hospital here, and annual horse shows are held in the palace park.

Surrounded by gardens and leafy avenues, fields, meadows and pastureland, Strömsholm Palace has been used by Sweden's kings since the time of King Gustav Vasa. The Baroque palace is built on a fortified islet where the fast-flowing waters of the Kolbäck River become calmer and flow into the Freden inlet.

Its central position with its many waterways, its proximity to the industrial works in Bergslagen and the fertile soil were some of the factors that persuaded King Gustav Vasa to build an estate on an islet in the Kolbäck River in the 1550s.

After the death of King Gustav Vasa in 1560, Strömsholm's history was dominated by queens such as Katarina Stenbock and Maria Eleonora. A major change came when Queen Dowager Hedvig Eleonora had the old building demolished in the 1660s and commissioned architect Nicodemus Tessin the Elder to replace it with a new palace that was more worthy of Sweden's position as a great power. When Hedvig Eleonora also acquired Drottningholm her interest in Strömsholm cooled somewhat, but she still ensured the dignified design of Strömsholm. The new palace was completed in around 1680, but the queen dowager never saw the finished interiors before she died in 1715.

King Gustav III shuts himself in

The royal family's visits to Strömsholm became shorter and less frequent, and their finances became weaker. As a result, the work involved in completing the interiors took a long time. During the 18th century, the palace was decorated austerely and took on a simplicity that was probably not the intention to begin with. Very little in the way of courtly life took place here. King Gustav III was more interested in palaces and castles other than Strömsholm, and when he was here it may not have been primarily for his amusement. During a visit in 1778, the king is said to have shut himself in for two days to go through 'political papers' while his companions had to endure idleness and pouring rain. King Gustav III's consort, Queen Sofia Magdalena, owned Strömsholm following the death of her husband, but she too showed little interest in the palace. Her sister-in-law, Duchess Hedvig Elisabet Charlotta, wrote in her diary that the dowager queen was allowing Strömsholm:

which is a charming place, to fall into ruin."

During the 19th century, Strömsholm continued to become less important as a royal residence, and in the 1860s the palace ceased to be used for overnight stays. In 1868, the Swedish Army Riding School was established here and also had premises at the palace. The manège, stalls and accommodation were now built on Malmen, an architecturally and historically important collection of buildings that has largely been preserved to this day. Since the closure of the riding school in 1968, the buildings have been used for civilian purposes. Strömsholm is now home to a riding college and an animal hospital, and annual horse shows are held in the palace park and its surroundings.

In the 1970s, the Royal Collections refurnished the palace to recreate something of the appearance of the interiors during the Baroque era and the time of Queen Dowager Sofia Magdalena. Furnishings and fittings from various periods that had been at the palace were recreated, and this work is still continuing. The palace was opened to the public in 1972. 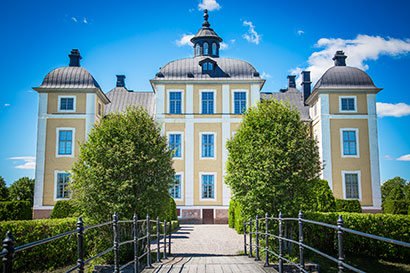 In the 1550s, King Gustav Vasa built an estate on an islet in the Kolbäck River which eventually evolved into Strömsholm Palace. Photo: Raphael Stecksén 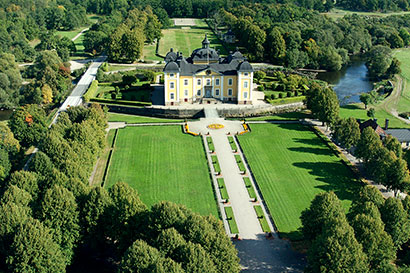 The Baroque palace is built on a fortified islet where the Kolbäck River flows into the Freden inlet. Photo: The Royal Court

Hedvig Eleonora is the queen who has had the greatest impact on Strömsholm Palace. She demolished the old building and commissioned the palace architect to design a new palace worthy of Sweden's position as a great power. Photo: Alexis Daflos 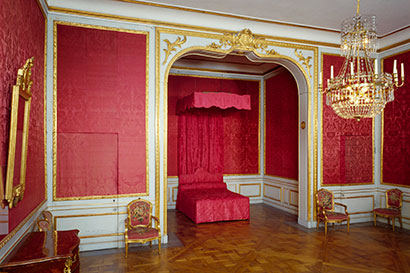 The Queen's Bedchamber is an example of Swedish interior art in the Gustavian style. Photo: Alexis Daflos 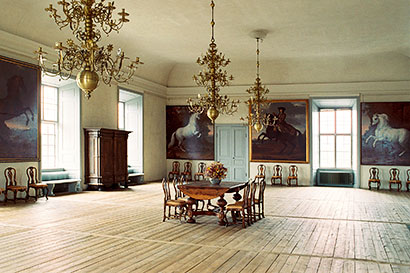 The horse portraits in the Hall of State. When King Karl XI was at Strömsholm, he devoted his time to riding and hunting. Today, Strömsholm is home to a riding college. Photo: Alexis Daflos

Pre-booked tours can be given in English or Swedish. For groups with specific interests, tours can focus on topics such as art, furniture...

The Royal Gift Shop at Strömsholm Palace entrance hall, is a unique present and souvenir shop offering products with a connection to the ...

Early in the 1550s, King Gustav Vasa ordered the building of a Palace on a small island in the fast-flowing Kolbäck River. Much of that P...

King Gustav Vasa laid the groundwork for Strömsholm Palace when he had an estate built on an island in the Kolbäck River in the 1550s. Af...