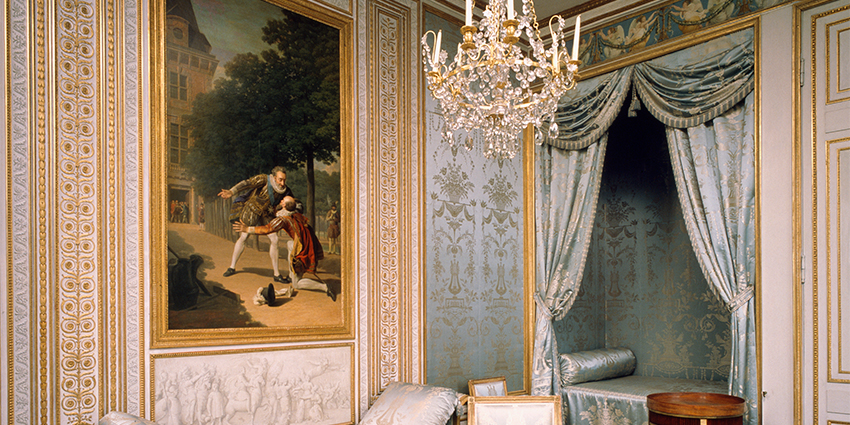 'Sully at the feet of King Henrik IV'

A single oil painting hangs in Gustav III's Pavilion in Haga Park. It was commissioned by the king himself, when he met the artist Alexander Rosin in Paris.

Henri IV, or Henri of Navarre, has been both respected and criticised for changing his religious affiliation during the period. For a while, he managed to stave off the religious strife between Catholics and Protestants. He ended up being murdered in a carriage in Paris by Ravaillac, an angry rebel teacher.

Perhaps Roslin, the great aristocratic portrait painter, deemed it a little beneath himself to paint a historical motif. The painting was not shown in Paris, and was sent to Sweden instead. There, it was first hung at Gustav III's Ekolsund Castle before being taken to Gustav III's Pavilion in Haga Park.

This is the only oil painting in the pavilion. It is permanently mounted, and is part of the room's decorative scheme. Louis Masreliez, who faithfully followed all the king's wishes when it came to decorating the pavilion, painted the motif of King Henri IV's entry into Paris in grisaille.

The painting depicts Henri IV's reconciliation with his finance minister Sully. Sully's memoirs are also to be found on the shelves in Gustav III's library in the pavilion. The building in the background is the castle in the southern French city of Pau. At the time, there was a craze for the era of King Henri IV. Note the costumes. King Gustav III and his contemporaries called this Burgundian costume, and it appealed to Gustav's theatrical side. Jean Eric Rehn was commissioned to design a Swedish court costume inspired by the fashions of the time of King Henri IV – that is, the late 16th century and early 17th century.

At the time of King Gustav III's visit to Paris, a play about King Henri IV was being performed at the theatre: La Partie de chasse de Henri IV (King Henri the Fourth's hunt). Naturally, the theatre-loving king attended the play in Paris and subsequently had it staged in Stockholm. 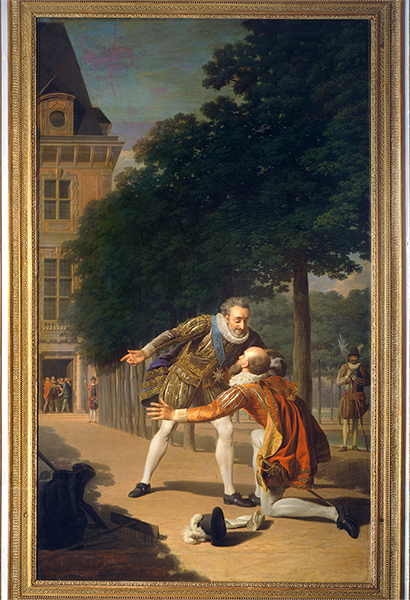 The fact that King Gustav III commissioned the oil painting and had it permanently affixed in his bedchamber at the Haga Pavilion says a great deal about his fascination with and respect for the French King Henri IV. Photo: Alexis Daflos/Royalpalaces.se