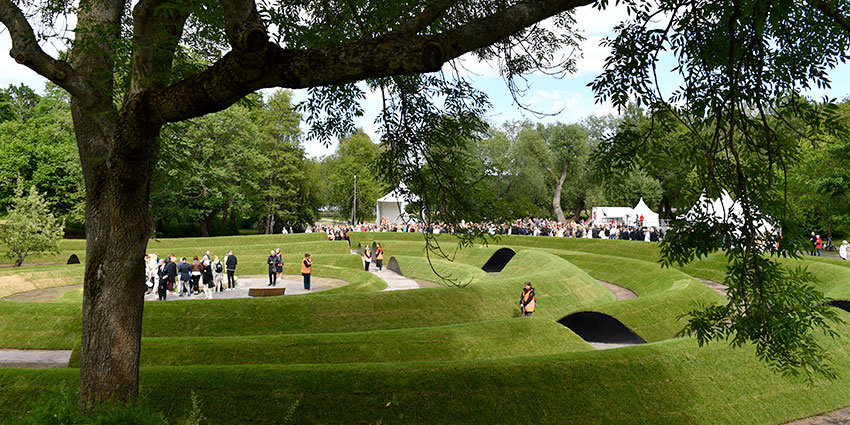 Royal Djurgården is Sweden's most popular recreation area. This makes it a particularly suitable location for national memorials, and many such monuments are therefore found here.

"The work conveys the energy unleashed when natural forces are set in motion, as well as the ability of nature to heal wounds and restore balance after abrupt events."

Memorial to the victims of the 2004 tsunami

The memorial to the victims of the tsunami in Southeast Asia is situated at Blockhusudden on Southern Djurgården. This beautiful location, with its views of the sea approach to Stockholm and direct contact with the oceans, is a fitting site on which to honour the approximately 225,000 people who died, 543 of whom were Swedes.

The memorial was commissioned by the Swedish Government and was unveiled by King Carl XIV Gustaf on 5 June 2018. It was designed by Danish artist Lea Porsager and erected by the National Public Art Council Sweden in cooperation with the Royal Djurgården Administration. It is described as follows on the Swedish National Property Board's website:

"Gravitational Ripples is based on the pulsating movement that is a part of all life in the universe, in both micro and macro formats. It conveys the energy unleashed when natural forces are set in motion, as well as the ability of nature to heal wounds and restore balance after abrupt events. The site is shaped as a spiral of ramparts that rise above the ground. This same type of double helix can often be found in nature, in galaxies, snail shells and sunflowers. The memorial merges with the surrounding landscape, offering a space for a broad range of experiences and emotions. At the centre of the memorial are two oval formations, one of which is engraved with the names of those who died in the tsunami."

The memorial to the victims of the 1994 Estonia disaster is located next to Galärvarv Cemetery on Southern Djurgården. Commissioned by the Swedish Government, it was designed by Polish sculptor Mirosław Bałka and dedicated by Speaker of the Riksdag Birgitta Dahl on 28 September 1997, the third anniversary of the ferry's sinking.

"We will never forget their names or their fate."

The monument consists of a granite wall in the shape of a triangle, with an entrance from the seaward side. A tree stands at the centre, with an iron ring bearing the coordinates where the Estonia sank. The names of those who died – except for those whose relatives declined – are inscribed on the walls, together with the following text:

"In the early hours of 28 September 1994, the ferry M/S Estonia capsized and sank during its journey from Tallinn to Stockholm. Eight hundred and fifty-two people from Sweden, Estonia, Latvia, Russia, Finland, Norway, Denmark, Germany, Lithuania, Morocco, the Netherlands, France, the UK, Canada, Belarus, Ukraine and Nigeria died in the disaster on the Baltic Sea. We will never forget their names or their fate."

Thirty thousand Baltic people fled to Sweden during the Second World War, most of them in 1944 from the Red Army. Many of them were Estonians, and Estonians and Estonian Swedes erected a memorial on Manilla Holme to commemorate the 50th anniversary of their journey and to thank the people of Sweden. It was inaugurated by King Carl XVI Gustaf on 7 October 1994. In his speech, The King said:

"Freedom Gate stands in honour of the Estonian people's courageous fight for democracy and justice. This monument shall also be a sign of the closeness between our two peoples."

The monument is an eight metre high granite portal with a narrow opening at the centre, created by Estonian sculptor Matti Varik. The wording on the gate reads:

"May this Freedom Gate testify to the humanity and tolerance of the Swedish people towards those who sought freedom in evil times, and to people who found a new home here."

Since the Second World War, over 80,000 Swedes have served the UN. More than 80 of them have died abroad. The Swedish Armed Forces and other organisations have erected a monument in their honour at the water's edge below the Swedish National Maritime Museum. It was inaugurated by King Carl XVI Gustaf on 24 October 1995, the 50th anniversary of the founding of the United Nations. The memorial was created by sculptor Liss Eriksson in bronze and granite, and is inscribed "In the service of peace".

The Veterans' Monument honours all military personnel and civilians who have taken part in national or international humanitarian and peace-keeping operations. It was commissioned by the Swedish Government, and is located next to the UN Monument. It was inaugurated by King Carl XVI Gustaf on Veterans' Day, 29 May 2013.

The monument was created by sculptor Monika Larsen Dennis and depicts a two metre high marble bud on a terrazzo platform with inlaid steel. The work is called Restare, from the Latin restare – to stay, to rest, to remain. Captured by Lars O Ericsson in his poem, The Warrior's Rest (extract):

"Making wars for peace – making peace for war
Heroes – each according to his own measure
Protected, fought
Sometimes fell
Not rarely melted their happiness for others
Showed us the measure – brimful
The determined opposite of weathervanes
Intractable will, hidden courage
Not so neutral that they abstained
From doing everything in our place
Thus it is our debt
That the warrior may rest."

Veterans' Day has been observed at these monuments each year on 29 May to honour all those who have taken part in military and civilian operations in the service of peace. The resolution that led to the UN's peace mission in Palestine, the first of its kind, was signed on 29 May 1948. This is marked by the International Day of United Nations Peacekeepers, known as Veterans' Day in Sweden. Veterans' Day was given state ceremonial status in 2011, and since 2018 has been a national flag day.

Count Folke Bernadotte was among those who took part in the UN's first peace operation in Palestine. He was the UN's first mediator, and was killed during this assignment in 1948. He lived at Dragongården, next to the Museum of Ethnography, and a bust by Norwegian sculptor Solveyg W Schafferer was erected in 2010 in his memory at the water's edge. The Folke Bernadotte Bridge was designed by &Rundquist architects, and was opened in 2019 next to the bust.

The Lady Working for Peace in the World

The Ministry for Foreign Affairs' Ann Berne unveiled The Lady Working for Peace in the World on 16 June 2016 on Kärleksudden, opposite the diplomatic quarter. It was donated by the Swedish Physicians for the Prevention of Nuclear War, and was created by sculptor Peter Linde. A woman with outspread arms stands atop a plinth depicting Swedish disarmament negotiators Alva Myrdal and Inga Thorsson, and the statue is dedicated to all women – both known and unknown – who have worked or are working for peace.

Top image: Gravitational Ripples on Royal Djurgården – a memorial to the victims of the 2004 tsunami in Southeast Asia. Photo: Anders Wiklund/TT 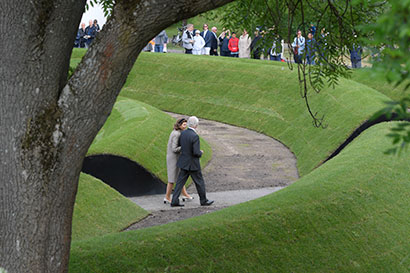 Gravitational Ripples, a memorial to the victims of the tsunami, is situated at Blockhusudden. The photo shows The King and Queen during the opening ceremony in 2018. Photo: Anders Wiklund/TT 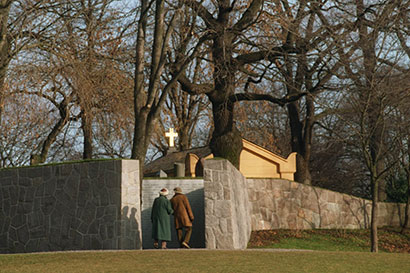 The Estonia Monument is located next to Galärvarv Cemetery on Southern Djurgården. The monument was designed by Polish artist Mirosław Bałka. Photo: Bengt Eurenius/TT 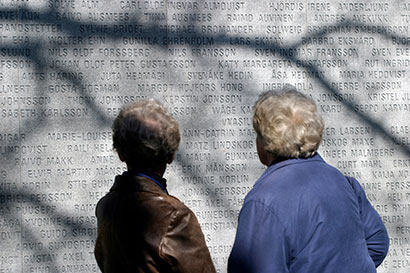 The names of those who died in the Estonia disaster are inscribed on the monument. Photo: Robert Ekegren/TT 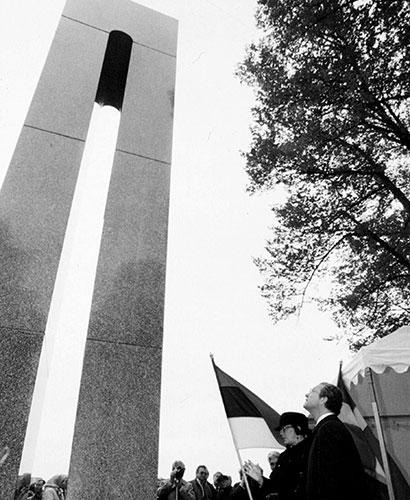 Freedom Gate. The monument is located on Djurgården's Manilla Holme. Here, The King is seen at its inauguration in 1994. Photo: Gunnar Seibo/TT 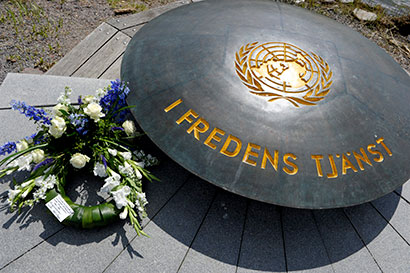 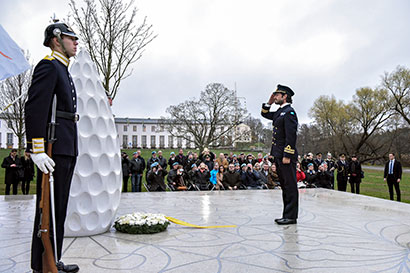 The Veterans' Monument, situated next to the UN Monument, was inaugurated in 2013. The photo shows Prince Carl Philip during a memorial ceremony to mark ten years of the UN in Cyprus. Photo: Anders Wiklund/TT 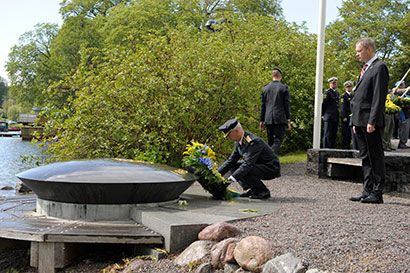 Veterans' Day is held annually at the Veterans' Monument and the UN Monument, and since 2018 has been a national flag day. The photo shows Supreme Commander Sverker Göranson and Minister for Defence Sten Tolgfors during the ceremony in 2011. Photo: Janerik Henriksson/TT 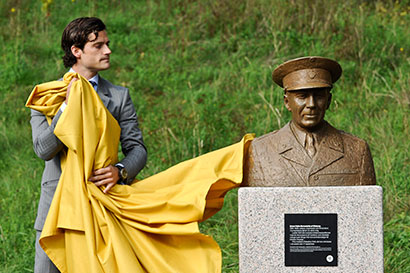 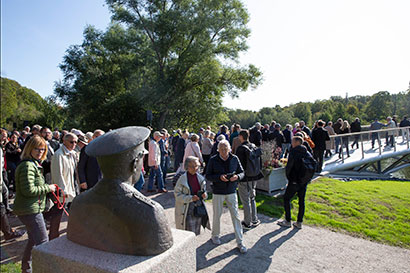 The Folke Bernadotte Bridge links Museiparken and Rosendal. The bust of Folke Bernadotte is located at the northern footing. The King and Queen opened the bridge in 2019. Photo: Johan Jeppsson/TT 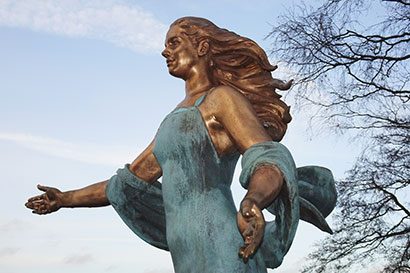 The Lady Working for Peace in the World. The sculpture is located on Kärleksudden, Southern Djurgården. Photo: Holger Ellgard/Creative Commons (link to licence, click on the photo)

The world's first national city park dates back to before the time of Christopher Columbus. Here, nature, culture and entertainment all c...

In summer 2020, another sculpture exhibition was arranged on Royal Djurgården, thanks to the new royal foundation: Princess Estelle's Cul...

Royal Djurgården is Sweden's most popular recreation area. This makes it a particularly suitable location for national memorials, and man...