According to Nicodemus Tessin the Elder´s plans from 1668, a palace chapel was already planned to be built in one of the east-facing raised centre risalits. The chapel however was not finished until the 1730s when Carl Hårleman was commissioned by Queen Ulrika Eleonora the Younger to complete a chapel on the palace's third floor.

The chapel´s architecture was inspired by Italian baroque churches. The vaulted walls were eredted in 1736 and stucco workers and painters worked on the interior the following year.

The alter retable was completed in 1739 by the sculptor Johan Fast.

The organ at Strömsholm Palace Chapel is one of the best preserved music instruments from the 1700s and was erected in 1742 by organ builder Daniel Stråhle.

The organ is placed just outside the chapel nave in a special room that is partly visible from the main chapel through an opening containing church benches.

Placed opposite the pulpit, the idea was that the organ and pulpit would create a balance with each other in relation to the alter and the bow formed openings towards the nave.

The visible façade pipes are made in polished English copper, something that was common at the time. The console was placed at the back of the organ, where the organ ramps can also be found.

The organ at Strömsholm Palace Chapel is one of the best preserved music instruments from the 1700s. It is placed just outside the chapel nave in a special room that is partly visible from the main chapel. Photo: Alexis Daflos/Royalpalaces.se 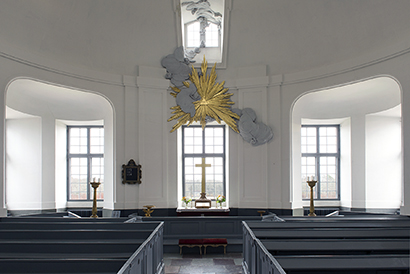 Strömsholm Palace is open for pre-booked tours year round, and can be given in English or Swedish. For groups with specific interests, to...

Early in the 1550s, King Gustav Vasa ordered the building of a Palace on a small island in the fast-flowing Kolbäck River. Much of tha...

King Gustav Vasa laid the groundwork for Strömsholm Palace when he had an estate built on an island in the Kolbäck River in the 1550s. Af...