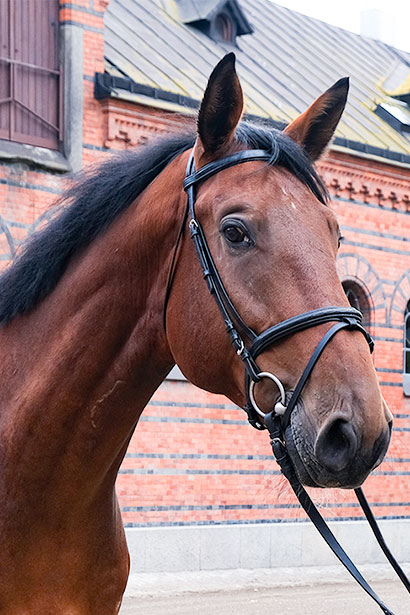 Othello was purchased for the Royal Stables in May 2022, and was born and raised at the Piledal stud farm near Ystad. He was one of the horses who participated in the regular show days at Flyinge/Strömsholm. These show days are arranged in association with the national riding facilities at Flyinge/Strömsholm, the mounted police, the Life Guard, the Royal Horse Guards Association and the Royal Stables. Othello was one of the horses shown at the show day in April 2022.

Othello is our largest horse, at just over 186 cm high at the withers, and will need a little time to build up his body. During the spring and the early summer, we have put him in front of the carriage and practised riding out in an urban environment. Othello’s performance has been excellent! The plan is now to carry out a little more training in front of the carriage during the autumn, and to combine this with outdoor riding on Djurgården. If all goes well, Othello will carry out some simpler assignments next year.

Before Othello came to the Royal Stables, he was called Piledals Henry.

Take a tour through the Royal Stables, with its harness room, cars and carriage houses. Welcome to visit the café and the gift shop which...