See the Royal Stables coach sheds, which are home to around forty carriages and sleighs for various occasions. Most of them date back to the 19th century. They include the two famous Sjuglas State Carriages.

Horse-drawn carriages are used at State ceremonies and official occasions. In the Royal Stables there are about 50 horse-drawn coaches, carriages and sleighs from the middle of the 19th century to the early 20th century.

At State ceremonies the horses are dressed up in State-harnesses when put to the Royal carriages. Further, the Crown Equerry, Equerry, Coachmen, Outriders and Footmen are dressed in elegant liveries and uniforms that contribute to the beauty and elegance of the Royal equipages.

The Royal coaches and carriages are either driven by coachmen from the box seat or postilion-driven, which gives the Royal passengers a better view from the carriages, but also the public a better opportunity to see the Royalties in the carriages. Usually the carriages are drawn by two or four horses, but at special events six horses are used.

The State Coach (Glass Coach) is used at State Opening of Parliament and incoming state-visits if weather conditions prevent the use of open carriages. The State Coach was built in 1897 in connection with King Oskar II’s 25th Anniversary on the throne in 1897. Coachbuilder was Ad. Freyschuss Hofvagnfabrik, Stockholm. The State Coach cost about 8 000 SEK at that time.

Karl XV Gala Coupé is used at State ceremonies such as formal audiences, when foreign ambassadors present their credentials to the King. This carriage is also used at incoming state-visits visits together with the State Coach if weather conditions prevent the use of open carriages. The Gala Coupé was bought by King Karl XV in 1859 from the German coachbuilder Lauenstein & Co, Hamburg.

Coupés are used at formal audiences, accompanying the Gala Coupé that is used for the ambassadors when they arrive at the Royal Palace to hand over their credentials to the King. Previously coupés were used for everyday transports of members of the Royal Family and the Court. This coupé was built by the Danish coachbuilder F.C. Schultz, Copenhagen. There are four coupés kept at the Royal Stables today.

H.M. The King’s Gala Barouche from about 1850 is the oldest carriage in use at the Royal Stables. This elegant barouche was restored and presented to King Carl XVI Gustaf at his 50th birthday in 1996. The King’s Gala Barouche is used at State Opening of Parliament, on the National Day and at Royal jubilees. The carriage is postilion driven by four, or at special events, six horses. The Gala Barouche was built by the German coachbuilder Croissant & Lauenstein, Hamburg.

The two elegant postilion-driven Gala-Barouches (No 2 and No 3) are used at incoming state visits, provided the weather conditions are suitable for open carriages. One of these gala barouches (No 3) is also the Royal ”wedding carriage”. It was used at the King’s wedding in 1976, at Crown Princess Victoria’s wedding in 2010 and at Princess Madeleine’s wedding in 2013 and Prince Carl Philips wedding in 2015. These Gala Barouches were built around 1900 by the Swedish coachbuilder E. Nylunds vagnfabrik, Stockholm.

The Gala Landau is used at ceremonial occasions, e.g. at State Opening of Parliament. It was also used by members of the Royal Family on the National Day, June 6. The Gala Landau was built around 1870 by the Swedish coachbuilder J. Normans vagnfabrik, Stockholm.

This elegant Chariot was a wedding gift to Crown Prince Gustaf and Victoria of Baden from Victoria’s parents, the Grand Duke and Duchess of Baden in 1881, together with a barouche and a set of four harnesses. The Chariot was built by the famous French coachbuilder Kellner, Paris. The Chariot is no longer in use.

The Union State Coach, or old Glass Coach from about 1840, is the largest and oldest coach at the Royal Stables. The coach is no longer in use, but is an excellent example of the ideal and design of a state coach from mid-19th century. It is called the Union Coach, since it still has the Royal coat of arms from the Swedish-Norwegian union period that ended in 1905. The coach was built by the Swedish coachbuilder J. Norman, Stockholm. 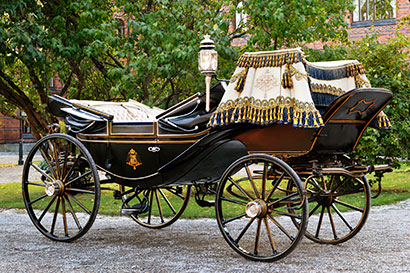 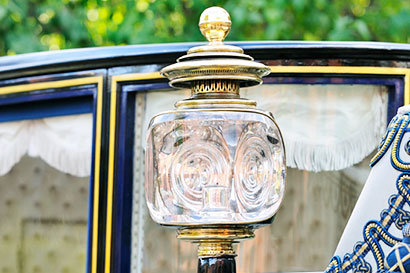 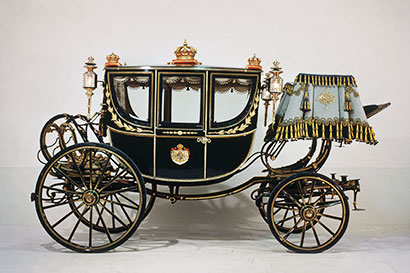 The Sjuglas State Carriage from 1897. The carriage was made by Ad Freyschuss Royal Carriage Factory in Stockholm. Photo: Leo Treaster Swidler/Royalpalaces.se 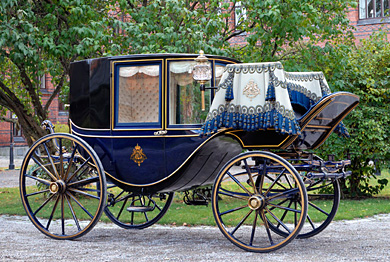 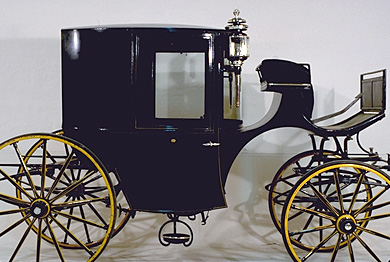 The Coupé was made in Copenhagen by F. C. Schultz around 1890. Photo: Royalpalaces.se 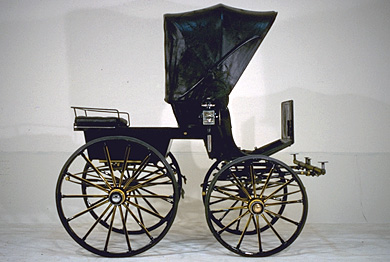 Stanhope Phaeton. The carriage was brought by Queen Victoria from Germany. Photo: Royalpalaces.se 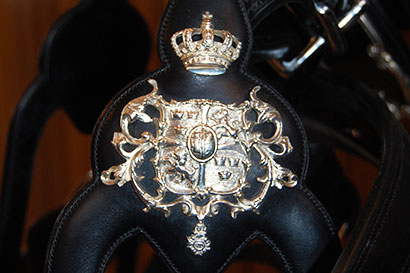