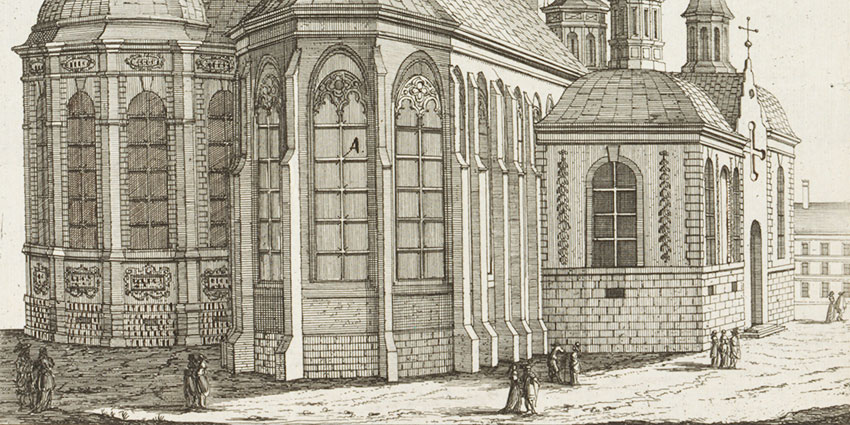 The Riddarholmen Church: A history

The Riddarholmen Church is Sweden's royal burial church. Up until 1950, seventeen monarchs were buried here. The church hides many historic secrets. Magnus Ladulås' burial place is still shrouded in obscurity.

From priory to royal burial church

Grand, secretive and surrounded by an air of mystery, the Riddarholmen Church – Stockholm's oldest preserved building – towers up above the city. To this day, we are still seeking answers to its mysteries.

The church has a long history which stretches back to 1270, when a Franciscan priory was founded on what is now Riddarholm. The Franciscan order was established in Italy in the early 13th century by Francis of Assisi, and came to Sweden in the 1220s. Here, the order was also known as the Greyfriars, in reference to the grey habits worn by the monks. The work involved in building the actual church probably began some years later, but we can conclude that construction was probably under way by 1285. This was when King Magnus Birgersson – also known as Magnus Ladulås – wrote in his will that he wanted to be buried at the abbey. And so he was – or at least, we believe so.

In 2011, an exhumation of what was thought to be his tomb revealed that it contained the remains of a family dating from the 15th and 16th centuries. Magnus Birgersson's burial place is still shrouded in obscurity.

The next royal burial, that of Karl Knutsson Bonde, was in 1470. Up until 1950, when the Riddarholmen Church ceased to be the royal burial church, seventeen monarchs were buried here. Since 1807, the church has only been used for burials and memorials. In other words, regular services are not held here.

The Riddarholmen Church was completed in around 1300 and at that time was built almost entirely of brick, which was unusual in Sweden. The ribbed vault in the chancel was gilded, in contravention of the rules of the order, which advised simplicity and restraint when it came to ornamentation. The lavishness of the church was probably due to Magnus Ladulås' decision to be buried there. The church of the Franciscan monks originally consisted of a large nave and the current north side aisle, which led into the cloister and the abbey garden. The latter was surrounded by rooms including a library, bedrooms and dining rooms. In the 15th century, the cloister south of the church was incorporated by expanding it and opening it towards the nave. To this day, some of the cloister's walled-up openings towards the abbey garden can be seen in the form of niches with pointed arches in the south wall. The residents of the Franciscan priory may not have been wealthy, but they certainly lived a rich spiritual and cultural life. It was here that the first book printed in Sweden was produced in 1483.

The monks are forced to leave

Following the Diet of Västerås in 1527, when Sweden broke away from the Roman Catholic church, the Franciscan monks were forced to leave the abbey and the buildings were either demolished or rebuilt. However, the church itself survived, and at the end of the nave Magnus Ladulås (possibly) and Karl Knutsson Bonde still lie beneath their tombs, produced by the Dutch sculptor Lucas van der Werdt in 1574 and commissioned by King Johan III.

A new chapter in the history of the Riddarholmen Church began when, before being killed in battle on the continent in 1629, King Gustav II Adolf decreed that a crypt should be built for him on the south side of the church. Today, this is known as the Gustavian crypt.

Just three years later, in 1632, King Gustav II Adolf was killed at the Battle of Lützen and this became his final resting place. The Karolinska crypt was then built, which houses King Karl XII's grave, and the Bernadotte crypt, with King Karl XIV Johan's mighty sarcophagus in view.

The sarcophagus is made from Garberg granite from Älvdalen. It was completed eight years after the king's death, but winters with poor snowfall meant that it was not until four years later in 1856 that it could be transported 250 kilometres by sledge from Älvdalen to Gävle, where the 16 tonne sarcophagus was loaded onto a ship for the final leg of its journey to Stockholm. The sarcophagus was transported on two sledges: one for the coffin, and one for the lid. The coffin was pulled by 110 people from Älvdalen, and the lid was pulled by 70 men from Sollerön and Mora, all dressed in their ceremonial finery. They were accompanied by two musicians, one sitting on the coffin and one on the lid.

King Gustaf V was the last monarch to be laid to rest at the Riddarholmen Church in 1950.

In the 1910s, having attended Queen Dowager Sofia's funeral in the cold, dark church in January 1914, Crown Princess Margareta proposed the creation of a new royal burial site "out in nature".

In the 1910s, having attended Queen Dowager Sofia's funeral in the cold, dark church in January 1914, Crown Princess Margareta proposed the creation of a new royal burial site "out in nature". She pursued the idea together with Prince Carl, and by 1922 the new burial site was ready for use on a spit of land in Brunnsviken, Haga Park. As a reminder of this, the Haga Wall in the Riddarholmen Church now bears the Seraphim arms of those buried at Haga.

Today, much of the wall space in the Riddarholmen Church is covered by Seraphim arms. The Order of the Seraphim, a royal Swedish order and Sweden's highest award, was instituted in 1748 by King Fredrik I. In addition to the actual decoration, knights or members of the Order of the Seraphim also have a coat of arms painted. While the knight or member is still alive, this coat of arms is kept at the Royal Palace of Stockholm. Following their death, it is then transferred – after a decision from the Grand Master – to the Riddarholmen Church, where it is hung on the wall. On the day of the funeral, the Seraphim bell is rung.

Copperplate engraving of the Riddarholmen Church by the draftsman Erik Dahlbergh, from the folio Suecia antiqua et hodierna. Photo: The Royal Library 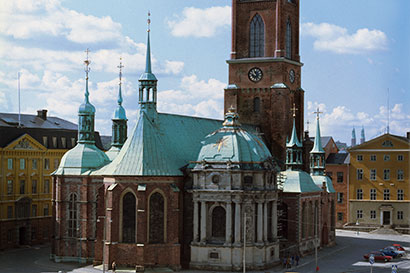 The Riddarholmen Church has a long history which stretches back to 1270, when a Franciscan priory was founded on what is now Riddarholm. Photo: Håkan Lind 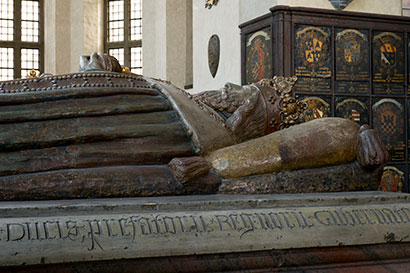 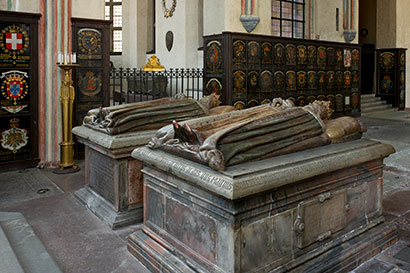 The tombs of Karl Knutsson Bonde and Magnus Ladulås from 1574. In 2011, an exhumation of what was thought to be Magnus Ladulås' tomb revealed that it contained the remains of a family dating from the 15th and 16th centuries instead. Photo: Alexis Daflos. 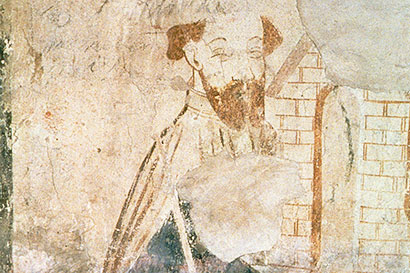 Portrait of Magnus Ladulås. When the church was being built, he wrote in his will that he wanted to be buried in the abbey church. Photo: Alexis Daflos 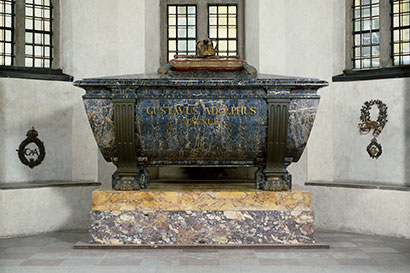 King Gustav II Adolf's sarcophagus. Before heading off to fight on the continent, he decreed that a crypt should be built for him. Photo: Alexis Daflos 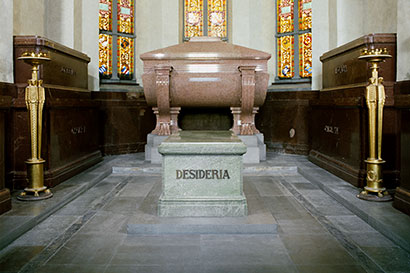 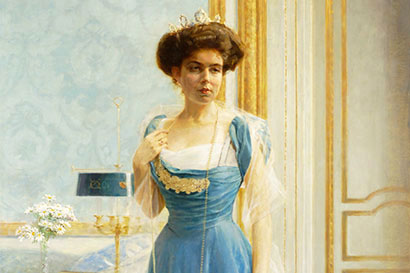 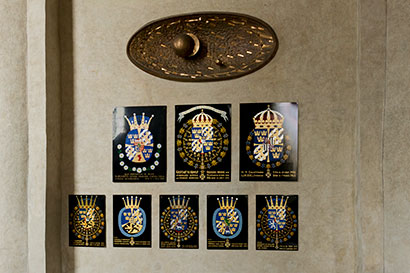 The Haga Wall with its bronze relief by Liss Eriksson. Photo: Alexis Daflos 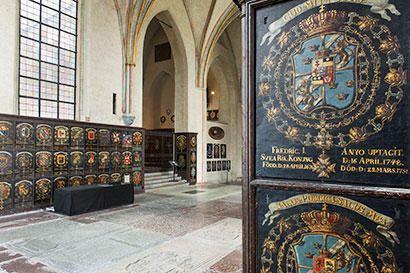 Seraphim arms adorn the walls of the Riddarholmen Church. The Order of the Seraphim is a royal Swedish order, and is Sweden's highest award. Photo: Alexis Daflos