Sweden's oldest Rococo theatre, which dates back to 1753, offers both performances and guided tours. In 1976, Princess Christina showed the palace theatre to opera singer Kjerstin Dellert, who fought hard to reawaken the theatre.

When Princess Lovisa Ulrika came to Sweden from Germany as the wife of the future King Adolf Fredrik, she was given Ulriksdal Palace as a wedding present. After her husband's coronation in 1751, her plans for a palace theatre at Ulriksdal – in accordance with European models – could be realised. Carl Fredrik Adelcrantz was engaged as the architect, and by 1753 the former manège had been transformed into a fully equipped theatre in the latest Rococo style, with room for an audience of 200. The adjacent inn was turned into grand salons for the royal family and their guests.

The palace theatre fell into disrepair after the assassination of King Gustav III, and spent more than 200 years in hibernation. In 1976, Princess Christina showed the palace theatre to opera singer Kjerstin Dellert, who fought hard to reawaken the theatre. Today, Confidencen has been restored to its former glory and is a living theatre once again.

The history of the palace theatre

The building that houses the palace theatre dates back to the 1670s, when it was built as a manège at Ulriksdal Palace. Another part of the building had housed an inn since the early 18th century.

The middle and largest of the royal rooms was equipped with a table à confidence, a table that could be lowered into the basement and then raised through a trapdoor after having been reset. This enabled guests to hold conversations in confidence without being heard by outsiders. This spectacular arrangement gave its name to the entire theatre building.

Swedish theatre flourished during the late 18th century. Thanks to the queen's efforts, singers, dancers, musicians and composers from both Sweden and the rest of Europe worked at the palace theatre during this period. It was also here that the young Crown Prince Gustav made some of his first attempts at theatrical and operatic art.

The theatre falls into disrepair

The palace theatre fell into disrepair after the assassination of King Gustav III, and the theatre machinery was dismantled in the 1860s. The stage opening and the doors towards the royal rooms were bricked up, and the salon with its rustic Renaissance décor – including joists and an open fireplace – was to be converted into a hunting lodge for King Karl XV. However, this was not completed before the king's death, since when the building has served as a storeroom, a school, a telegraph station, a military facility, offices and housing, among other uses.

Kjerstin Dellert takes up the fight

In the 1920s, when Drottningholm Theatre was rediscovered, the Confidencen itself was also found. This, however, was in much worse condition. The building was listed in 1935, and in 1965 the Ulriksdal Palace Theatre Foundation was established with the aim of saving the theatre.

In autumn 1976, Kjerstin Dellert came to Confidencen. She saw its potential, and started to fight to reawaken and restore the theatre. Ulriksdal Palace Theatre's friends' association, Confidencen Rediviva, was founded in the early 1980s and was responsible for Confidencen's operations up until 1996, when the Ulriksdal Palace Theatre Foundation took over in cooperation with the friends' association.

Breathing new life into the theatre

Mainly with the help of sponsors, private donations and voluntary work, a theatre organisation has been built up since the 1980s. The number of productions grew as Confidencen was recreated step by step.

The Confidencen dining room, including its table machinery, was restored in 1994-1997. The stage and the theatre machinery were returned to their 18th century condition in 2003-2004, using drawings and comparisons with the theatres at Drottningholm and Gripsholm. 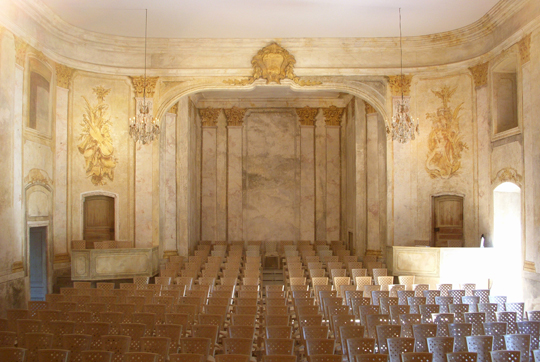 In 1996, the Ulriksdal Palace Theatre Foundation took over operations in cooperation with the theatre's friends' association, Confidencen Rediviva. Photo: Royalpalaces.se