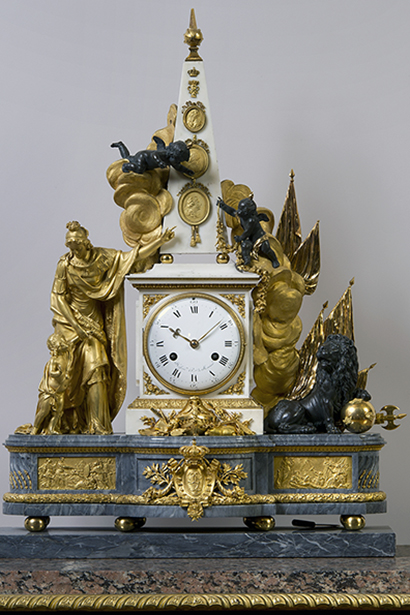 André Hessen was born Anders Bengtsson in Stora Tuna, Dalarna, in 1745. Following his apprenticeship in Stockholm, he arrived in Paris in 1767 and made a name for himself as a clockmaker. Clockmaking reached its peak in 18th century France, where clockmakers found favour with the royal court.

The table clock was made for King Gustav III's visit to Paris in 1784. According to tradition, the clock is said to have been presented to the king by the Swedes living in Paris. The clock features many symbols that pay tribute to King Gustav III and to Sweden. The female figure is Svea. She holds Crown Prince Gustav (IV) Adolf by the hand, pointing to the obelisk featuring portraits of King Gustav III, King Gustav II Adolf and King Gustav Vasa. The obelisk is surrounded by symbols of war, peace, victory and the prosperity of the nation.