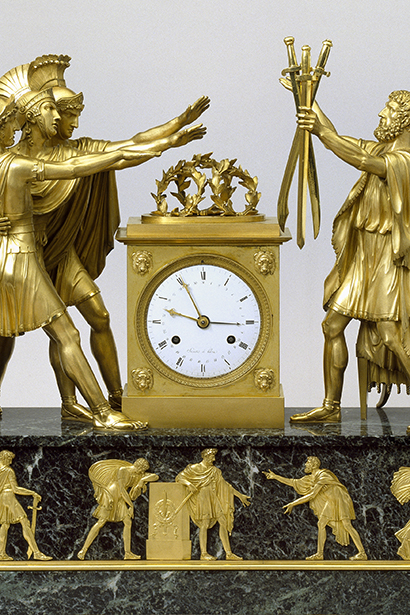 This table clock is signed by J-B Sirost, and was produced in Paris in around 1805. The bronze casing was made by Claude Galle.

Designs could be protected under French law, but in practice almost all successful models were copied. As a result, a smaller version of The Oath of the Horatii also exists, possibly by bronze-maker Pierre-François Feuchère, who sent a sketch of the same motif to the court in Württemberg for approval.

The work depicts an event from ancient Roman history, whereby the war against the city of Alba Longa was decided by a battle between the Horatii and Curiatii brothers. Here, the three Horatii brothers pledge an oath to sacrifice their lives for their country.

The Oath of the Horatii is a famous 1784 painting by the French artist Jacques-Louis David, and currently hangs in the Louvre in Paris.

The Royal Palace of Stockholm
The Empire Drawing Room, the Grand Guest Apartments